By keithla
TIME (all things time related)
Leave a comment 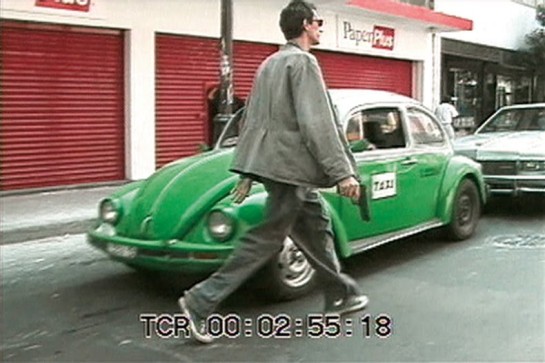 “In 2001 in Mexico City, Alÿs performed Re-enactments, for which he purchased a 9mm Beretta handgun and proceeded to wander around the city’s downtown with the loaded gun in hand. After 11 minutes of walking, Alÿs was detained by the police and eventually released. With the cooperation of the Mexican authorities Alÿs re-enacted the very same scene one day later. Within MoMA’s galleries, a two-channel video of the original action and its re-enactment are projected side by side, while related drawings, maps, newspaper clippings, and photographs accompany the videos. The video presentation of the action alongside its re-enactment underscores the ambiguities between reality and fiction, while anticipating the way public safety came to dominate the social and political debate within Mexico during the first decade of the 21st century.”